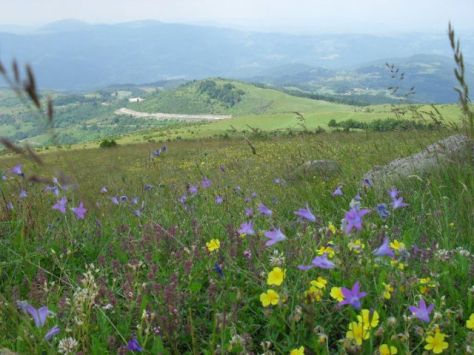 Golijabelongs to the inner zone of the Dinaric mountain range and the highest mountains of southwestern Serbia. 32 km long and extends in the form of passing the Latin letter „s“ in the west-east direction. The highest point of the mountain is flattened, unobservable Jankov kamen height 1833 m, then the amount of said black peak, which rises to 1795 m.

Its beauty and diversity of landscapes, preservation of original natural and cultural values, is one of the most beautiful mountains in Serbia. Golija surrounded by mountains in the north of the mountain Jelica, eastern Kopaonik, a dismal and Radočelom, western maple, and the south Zlatar, Jadovnik and Pester plateau. The area is limited Golija Ibar valley to the east, and Raska Ljutske River to the south, west and Moravice middle part of the valley Studenice the north and north-east.

The landscape is scarred by deep river valleys, among which are the elevations of various shapes and sizes. River basins and Studenica Moravice with its many tributaries are the main geomorphological processes and forms of relief.

The geological make up on the mountain Golija Paleozoic (Carboniferous and Permian formations) and the Triassic deposits, and to a lesser extent gornjokretacijske, Quaternary, Neogene, metamorphic and volcanic formations. Paleozoic rocks are part of a large Golija same belt of rocks, extending from the old to the northwest of Raska. This group is a great thickness of rocks, the greatest thickness / height reaches the Golija. It is a characteristic phenomenon of glacial troughs from which the largest is the more inclined, the southern slope Jankovog stone.